The soil in which the Douro Valley vines are planted is made up of schist, a slate-like metamorphic rock.  Rich in nutrients, it has also has useful water retention properties.


The interstices of the many large pieces of foliated schistose rock which make up a large proportion of the soil retain a certain amount of humidity, sometimes just enough to allow the vine to thrive in the arid conditions which prevail for most of the summer. The earth of the Douro thus shares the essential property of many great vineyard soils, the ability to allow the vines to thrive while restricting their access to water and consequently their yields. Combined with the small thick skinned berries of the traditional Port grape varieties, the dry conditions produce wines of great richness and depth.

The further east, the drier the climate becomes and the deeper the wines. The Douro Valley is divided into three broad areas, the Baixo Corgo, Cima Corgo and Douro Superior. The Baixo Corgo lies at the western end, closest to the Marão mountains, where the rainfall and vineyard yields are highest. This area mainly produces the lighter more early maturing styles of Port intended to be drunk relatively young.  To the east and with a drier climate and lower yields, the Cima Corgo area is the location of many of the Douro’s finest vineyards, such as Taylor Fladgate's estates of Terra Feita and Junco, and produces more concentrated and long lasting wines. The easternmost area, the Douro Superior, is the driest of all and is the source of many of the finest Vintage Ports, including those of Taylor Fladgate's Quinta de Vargellas. Viticulture was only practiced extensively in the Douro Superior after 1791 when the Valeira Gorge, until then the easternmost limit of navigation on the Douro, was opened to river traffic. For this reason, it was known for many years as the Douro Novo, or ‘New Douro’. 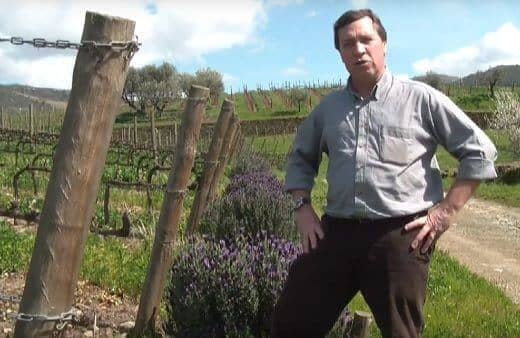 David GuimaraensSpringtime in the Vineyard