In  2008  Taylor Fladgate's  Head winemaker,  David  Guimaraens,  became aware of  the existence of a very old and rare cask aged port, dating from the period before Phylloxera arrived in the Douro Valley and destroyed most of its vineyards.  The wine, over 150 years in age, belonged to a distinguished Douro family and was stored in a wine lodge in the village of Prezegueda in  the Corgo  Valley. A treasured heirloom, the wine had been passed down from one generation to the next and attempts to persuade the family to part with it had been unsuccessful.

In  2009,  the  sole  surviving  descendant  of  the  family  died  leaving  no children.  Her heirs, not all of whom were family members, decided to sell the two casks of this unique and historically important wine.  Taylor Fladgate acquired  samples  and,  amazingly  in  view  of  its  age,  found  that  it  was not only in faultless condition but of superb quality.  The purchase was successfully negotiated and the two casks were moved to the firm’s lodges in Vila Nova de Gaia on 13th January, 2010.

Under normal circumstances a very old wood age port like this would have been incorporated into the firm’s aged tawny reserves, in this case into the 40 year old tawny blend.  However, in view of its quality, rarity and historical  interest,  Taylor Fladgate's  CEO,  Adrian  Bridge,  decided  that  it  should not be blended but should be made available as a unique collector’s item. In the autumn of 2010, the wine was launched as a very limited edition, under the name of Scion.  Scion is one of the oldest and rarest aged tawny ports ever sold and one of very few pre-Phylloxera wines from any vineyard region to reach us in perfect condition.

A halo of pale amber adorned with subtle olive highlights surrounds a core of deep mahogany. The wine envelops the nose with a sublime and heady fusion of opulent and seductive aroma. A rich dark redolence of molasses and fig is overlaid with complex notes of roasted coffee, cigar leaf, black pepper and cedar combined with a subtle nuttiness and the discrete scent of fine oak wood. Concentrated to a magical quintessence, the wine wraps the palate in a dense and sumptuous coat of luscious flavor interwoven with a crisp and vibrant acidity. Rich mellow flavor of astonishing intensity persists into the endless finish. This wine resonates like a stentorian voice calling down the centuries in a language no longer spoken in the world of wine.

We finished with a very unique tawny, one of those jaw-dropping moment when you thank God you quit that insurance job all those years ago. Adrian...

We finished with a very unique tawny, one of those jaw-dropping moment when you thank God you quit that insurance job all those years ago. Adrian Bridge set the scene. He explained how head winemaker David Guimaraens had become aware that a distinguished family living in the lower Douro Valley had a private reserve of port that had remained undisturbed and rarely racked since 1855. In 2009, the line of the distinguished family came to an end and without any children; her nephews consulted lawyers and agreed to sell the four remaining pipes to Taylors (a thirsty Winston Churchill allegedly stole one pipe away, though that has never been proven.) On 13th January 2010, two casks were transferred to Taylors and due to its price and rarity they opted not to back blend this ancient port into the 40-Year Old. Instead they chose to release it as a one-off, 155-year old, pre-phylloxera tawny port christened “Scion”, chosen due to its dual meaning both viticultural and familial. It is being released as 1,400 hand-blown, crystal decanters housed in a period wooden box and retailing for a cool £2,500. It looked the business. But what does it taste like? It is an astonishing tawny, although that word does not do justice to the panoply of aromas and flavours that entranced the entire room. It was remarkably deep in colour with thick tears coating the glass. The oxidative elements of the nose with far more diminished than I expected, especially when juxtaposed against the 40-Year Old Tawny. It was a symphony of heavenly Sauternes-like aromas, dark honey, allspice and molasses intertwined with fig and mint. It was so fresh and vibrant, evolving with each passing moment and I wished I could have stayed to longer to see how it would develop. The palate offers intense honeyed fruits with a thick, mellifluous texture cut through with razor-sharp acidity, hints of hazelnut and smoke towards the finish that contained awe-inspiring persistency, such that my mouth was still tingling when I was apologizing to my dinner date. Scion is undoubtedly an incredible tawny port in the loosest definition of the word. It is a sui generis that threatens to overwhelm the senses…but considered it ‘un-gentlemanly’ to do so. I must confess, I am not a great fan of the current vogue for ultra-expensive cuvées released to appease the whims of millionaires and PR companies. However given its age and the fact that this can never be repeated, the four-figure price tag does offer a unique experience. It was time to leave – my lunch date was waiting. I placed my order for a case of Scion and departed the Westbury Hotel. I’ll savour a tawny port of Christmas and dream about the Scion. Tasting Note A clear dark brown colour that looks like a mature Tokaji, with thick tears in the glass. It has a very intense, almost honeyed bouquet with allspice, singed leather, pressed rose petals, molasses, mint and a touch of dried fig. The oxidation is minimal, which is quite remarkable for its age, a sense of ebullience and joie-de-vivre bursting forth. The palate is full-bodied with intense honeyed fruits, touches of fig, date and liquorice vying for attention, biting acidity that cuts through the intense fruit. This is unbelievably fresh and vibrant with an almost Sauternes-like quality on the honey-glazed, hazelnut-tinged finish. It has unbelievable length. Simply stunning.
Score: 100
Neil Martin

Truly remarkable for having kept so well in wood for over a century-and-a-half. The piece de resistance of this tasting (and perhaps the raison...

Truly remarkable for having kept so well in wood for over a century-and-a-half. The piece de resistance of this tasting (and perhaps the raison d’etre too) was the release of Taylor’s Scion, a one-off bottling of a pre-phylloxera Port dating back to the mid–nineteenth century, probably 1855. It comes from a quinta belonging to the late Irene Viana Pinto in the village of Prezegueda in the Corgo valley near Régua. Two pipes were acquired by Taylors with a view to blending it in to the 40 Year Old Tawny lote (they still have stocks of 1900, 1908 and 1934 for blending) but they considered this wine so exceptional that they kept it apart and bottle the wine as it is. It is being sold in a hand blown crystal decanter, set into a wooden case with a book telling the story of the wine. There are 1,400 bottle of Scion available which will retail for around £2,500 a bottle. Tasting note: Deep mahogany in colour with an olive-green rim; fragrant, high-toned vinagrinho aromas, exceptionally clean and fresh, not maderised or baked; intense, concentrated, liquorous, very powerful, the essence of tawny, quite unctuous but offset by a streak of fine acidity, caramelised yet ethereal on the finish retaining considerable poise, leaving an aftertaste of Elvas plums.
Richard Mayson

Pre phylloxera Port fetches thousands. Scion, a “perfect condition” Port dating back to 1855, will be released by Taylor’s in December...

Pre phylloxera Port fetches thousands. Scion, a “perfect condition” Port dating back to 1855, will be released by Taylor’s in December after 150 years of ageing in cask. Classified by the Port Institute as Very Old Tawny, the wine is one of the rarest in the world as it dates back to the pre-phylloxera period. It will cost £2,500 per bottle. Earlier this week, Adrian Bridge, managing director of Taylor’s, explained why the wine was so “exceptional”. At a Tawny Port masterclass in central London, he said: “No-one else has ever done this, this is something totally exceptional. “We have scoured the valley for old wines that could be used in our blends but normally when you find something old, the ageing process has been so intense the wines are too cloying. “But with Scion,” he added, “we wouldn’t blend because the wine’s perfect, it’s got everything,” adding that the wine has been kept in basement cellar north of Regua, in conditions which Bridge described as “perfect”. The entire stock of Scion, amounting to 1,400 bottles, will be made available for release. Speaking of the £2,500 price tag, Bridge commented: “There will be people who will pay these prices. I feel instantly confident with it and it’s great to see something new and different in the Port industry.” Scion will be offered in a bespoke collector’s presentation box which pays homage to the period in which the 155-year old Port was made. The wine itself will be contained in a bespoke crystal decanter. Also included in the presentation box will be a limited edition book detailing the historical journey of Scion. Taylor’s secured the one-off Port from a “distinguished Douro family” who had kept the wine in a private family reserve. Taylor’s had previously entered into fruitless discussions with the heirless owner about acquiring some of her wine. But following her death, Taylor’s was contacted about the prior discussions, negotiations were re-established and a deal was agreed upon in January this year.”
Jane Parkinson, Drinks Business

Taylor’s releases £2,500 Port. A pre-phylloxera tawny port with more than 150 years of cask age has been released by Taylor’s with a price...

Taylor’s releases £2,500 Port. A pre-phylloxera tawny port with more than 150 years of cask age has been released by Taylor’s with a price tag of £2,500 a bottle, breaking new ground for the category.
Richard Woodard, decanter.com

Wow! It truly is an incredible experience. Truly exceptional.

SCION – A piece of Vinous history. 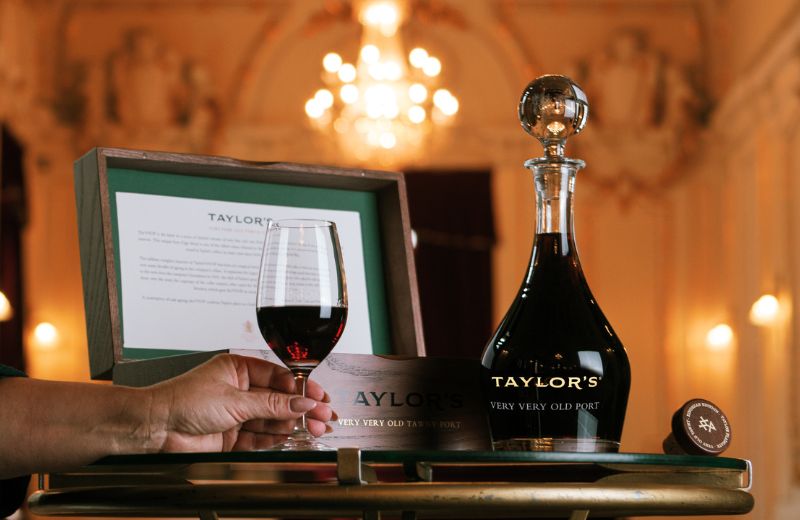