Grapes have been grown in Portugal since antiquity. The writings of Strabo, the great geographer of ancient Greece, indicate that inhabitants of the north west of the Iberian Peninsula were already drinking wine two thousand years ago. The Romans, who arrived in Portugal in the second century BC and remained for over five hundred years, grew vines and made wine on the banks of the Douro River where Port is produced today. The period of prosperity which followed the establishment of the Kingdom of Portugal in 1143 saw wine become an important export.

However, the emergence of Port wine as we now know it occurred much later. The first wines known by this name were shipped in the second half of the 17th century.

In 1386 the Treaty of Windsor had established a close political, military and commercial alliance between England and Portugal. Under the terms of the treaty, each country gave the merchants of the other the right to reside in its territory and trade on equal terms with its own subjects.  Strong and active trading links developed between the two countries and many English merchants settled in Portugal. By the second half of the 15th century a significant amount of Portuguese wine was being exported to England, often in exchange for salt cod known in Portuguese as bacalhau.

The Anglo-Portuguese commercial treaty of 1654 created new opportunities for English and Scottish merchants living in Portugal, allowing them special privileges and preferential customs duties. At that time, the centre of the wine business was not Oporto, as it later became, but the elegant northern coastal town of Viana do Castelo whose situation on the broad estuary of the Lima River made it a reliable natural harbour. The merchants imported commodities such as wool and cotton cloth from England and exported grain, fruit, oil and what was known as ‘red Portugal’, the light, acidic wine produced nearby in the verdant Minho region, particularly around the towns of Melgaço and Monção. 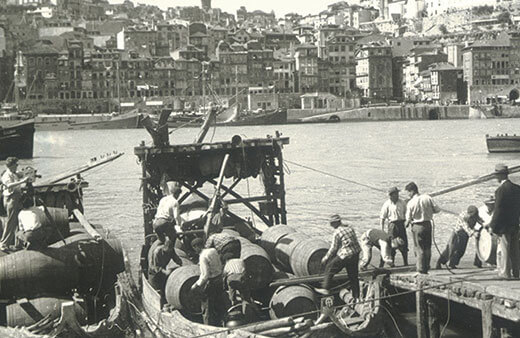 History of PortThe Birth of Port

The earliest recorded shipment of Port wine name took place in 1678. Find out more about the birth of Port.