The Marquis of Pombal

In 1703 the signing of the Methuen Treaty between England and Portugal gave further encouragement to the Port wine business, establishing that Portuguese wines imported into England should pay one third less duty than those from France. More importantly, the Port wines produced in the Douro Valley were also much more to the taste of the English consumer than the ‘red Portugal’ of the Minho.


English and Scottish merchants were not alone in trading in Port wine.  Dutch and German families were also involved in the business. However, the overwhelming importance of the English market meant that the British merchants predominated.

The second decade of the 18th century was the start of thirty years of rapid growth in shipments of Port wine and a period of great prosperity for both the producers in the Douro Valley and the Port wine shippers in Oporto. However, as time passed, this rapid growth in demand gradually gave rise to speculation in the trade and fraudulent practices such as the addition of elderberry, known as  baga, to poor wines to give them colour and the illusion of quality.  Further complications arose in the 1750s, which saw a sharp fall in demand and overproduction in the Douro Valley. In 1756, the Marquis of Pombal, Portugal’s prime minister whose influence and power had been enhanced by his handling of the catastrophic earthquake which had destroyed most of the city of Lisbon the previous year, stepped in to restore order.

Pombal immediately established state control over the Port wine trade in the form of a company, the Companhia Geral da Agricultura das Vinhas do Alto Douro (later known as the Real Companhia or Companhia Velha), with a monopoly on trade with England and Brazil as well as the production and sale of brandy in the north of Portugal. In the same year, the boundaries of the Port vineyard area were demarcated and marked out with 335 stone pillars, known as marcos pombalinos. In 1757 the first comprehensive classification of the Port vineyards was carried out (almost a century before a similar exercise was carried out in Bordeaux). Those producing the finest wines, known as vinhos de feitoria, were allowed to sell their wines for export and demand a higher price, whilst those making wines of more modest quality, called vinhos de ramo, were restricted to the domestic market. Measures were taken, such as the eradication of the elderberry tree within the demarcation, to curb the most common abuses.

The draconian actions of the Marquis of Pombal and the monopoly company, although unpopular at the time, resulted in an improvement in the quality of Port wine and ushered in a new era of growth and prosperity for both producers and shippers.  In establishing the geographical limits of the Port vineyards, classifying them according to quality and establishing standards for the production of the wine, Pombal was a visionary precursor of the modern concept of an AOC (appellation d’origine contrôlée).

These pioneering measures laid the foundations for today’s legislation which is one of the most sophisticated of any classic wine region. 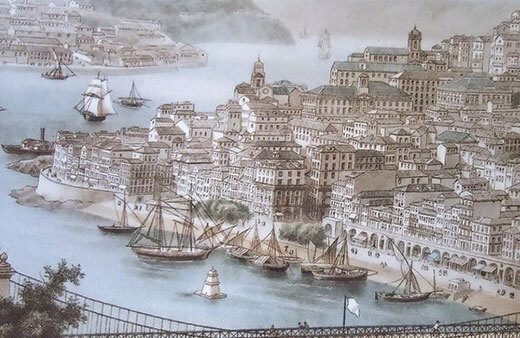 The practice of adding brandy to Port before it had finished fermenting, now an inseparable part of the process of making Port, was seldom followed in the early part of the 18th century.