In 1884 the railway was extended eastwards along the bank of the Douro, leading to the expropriation of part of the Vargellas vineyard and in 1886 to the construction of the Vargellas railway station.  In the same year, Lower and Middle Vargellas were purchased by the general contractor of the railway, Domingos Burguets, who went on to sell both properties to Taylor Fladgate in 1893.  In 1896 the firm purchased the third vineyard, Upper Vargellas, from the Countess of Azambuja, daughter of Dona Antónia Ferreira, founder of the Ferreira Port house, and the three properties were finally merged into one.

Not withstanding the outstanding reputation of the Vargellas wines, the acquisition was a bold step for the firm as phylloxera had clearly caused extensive damage to the property. Charles Sellers, the historian of the Port trade, in his book Oporto Old and New published in 1899 noted, ‘In 1893 Messrs. Taylor Fladgate & Yeatman acquired the Quinta de Vargellas, once famed for its production of fine wines, and though at the time of its purchase it was neglected and desolate they hope by judicious re-planting of the best parts of the Quinta to restore it to its former reputation.’

Twelve years later, in 1911, another distinguished Port historian, Manuel Monteiro, wrote of Vargellas, ‘It belongs to the well known and highly reputed firm of Taylor Fladgate & Yeatman of Vila Nova de Gaia who purchased it in 1893. However in such ruin did they acquire it and in such a state of abandonment and neglect that, although it constitutes an extensive domain, it produced only the improbable and derisory quantity of four pipes of wine!  Nevertheless, the unyielding efforts of Messrs. Taylor & Co., soundly and practically directed, by tilling the soil and breaking up the rock, soon caused the fruitfulness of former times to spring anew from the barren ground and with singular boldness and success have cause it to increase.’

The herculean task of rebuilding and replanting Quinta de Vargellas fell to the legendary Frank ‘Smiler’ Yeatman, the partner who led the company for most of the first half of the 20th century. Terraced walls were reconstructed or built anew and thousands of new vines were planted, all grafted onto American rootstock and representing the finest Port grape varieties.  Gradually the original production of the property was re-established.  From 4 pipes in 1893 it rose to 25 in 1886, 36 in 1905, 128 in 1928 and 199 by 1956.  By 1908 the wines of the quinta had achieved sufficient quality to be incorporated into the Taylor Vintage Port blend.

The development of Quinta de Vargellas was continued by Frank’s son, Dick Yeatman, who had studied viticulture at Montpellier.  He was aware that more needed to be known about the behaviour of the classic Port grape varieties and their individual contribution to the character of the wine.  In 1927 and 1935 he established two plots of vineyard at Vargellas in which each terrace was planted with a single traditional vine variety. In this he was ahead of his time. Port vineyards were usually planted with a mix of different varieties which were picked together and it was not for another half century that planting terraces or rows of single varieties became established practice in the Douro Valley.

Over the years that followed, the firm built up an extensive library of single variety wines made on a small scale for research purposes from the produce of these terraces.  This unique historic library of varietal samples constitutes a valuable and unique source of knowledge regarding the classic Douro grape varieties.

From the 1970s the pace of change at Vargellas accelerated. With the construction of a dam just below the Valeira gorge in 1976, the water level of the Douro rose and submerged the terraces closest to the river leading to the development of some of the higher parts of the estate.  Under the direction of the company’s chairman, Alistair Roberston, parts of the vineyard were extensively re-landscaped in the seventies and eighties.  This brought opportunities to introduce fresh plant material and use the experience and knowledge obtained in part from Dick Yeatman’s pioneering research to optimise the siting of each individual grape variety.

The 1990s saw the extension of the Vargellas estate westwards into an adjacent area of vineyard known as São Xisto (pronounced ‘sowng sheeshtu’).  In 1993 planting began on the first plot to be acquired, lying adjacent to the western boundary of the original part of the quinta. In 1999 the São Xisto vineyard was further extended with the acquisition of a larger area of land.  The São Xisto acquisitions represent 36 hectares, bringing the total area of Quinta de Vargellas to 191 hectares.  Both plots were planted in vertical rows using the vinha ao alto technique.

The most recent development in the vineyards at Vargellas has been the conversion of some of the plots on the upper levels of the property to the new sustainable vineyard model developed by the company’s estates and viticulture  manager, António Magalhães, and technical director David Guimaraens.  This award-winning model, based on the construction of very precisely engineered single-row terraces, is designed to prevent environmental damage, particularly soil erosion and the use of harmful chemicals, while ensuring the economic and sustainable production of very high quality Port.

For many years the protection of the environment has been a primary concern in the development and operation of Vargellas and Taylor Fladgate's other estates.  Among other measures, care has been taken to ensure that the vineyards are interspersed with natural woodland and scrub, protecting the habitat of local wildlife.  Taylor Fladgate has collaborated with neighbouring properties to create an extensive area of reserve where local species can develop without interference from hunters.

In spite of the radical nature of many of the technical advances made at Vargellas over the years, the intention has never been to change the quintessential character of the Vargellas wine but rather to preserve and refine it.  Some parts of the estate have remained essentially untouched, such as the historic terraces of the Vinha Velha. 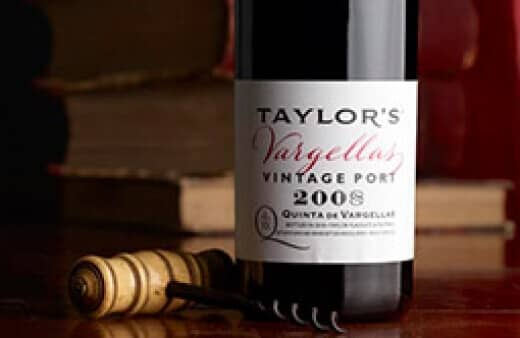 Inky black with a vivid purple rim. Compact and stylish nose, with intense aromas of blackcurrant and wild berries. 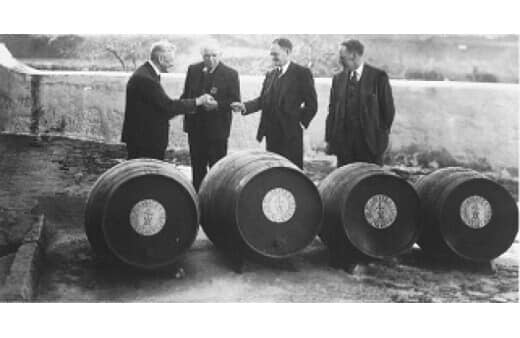 The story of Taylor's Port begins in 1692 with the arrival in Portugal of an English merchant called Job Bearsley.