The Cachão da Valeira, or Valeira gorge, famed for the site of Baron Forrester's death, had itself been the object of another significant development which was to have a profound effect on the future of Port wine.

Until the end of the 18th century, the narrow gorge was obstructed by a waterfall formed by gigantic outcrops of rock making it impossible to navigate upstream into the remote eastern reaches of the Douro.   In 1780 the arduous work of demolishing the stone slabs began.  By 1789 the first vessels were able to pass through the gorge and in 1791 the work of clearing the channel was finally completed, although the task of negotiating the fast running rapids of the Cachão remained extremely hazardous. Since the river was the only viable means of carrying wine out of the valley, there had been few vineyards in the area east of the Cachão.

With the opening of the gorge to river traffic, this area, which became known as the Douro Novo and later as the Douro Superior, saw the emergence of some of the Douro’s finest estates such as Quinta de Vargellas, later to be acquired by Taylor.  Their rise to prominence and the recognition of the quality of their wines did much to enhance the reputation of Port.

Until relatively recently, the Port wine trade was reliant on the river to bring the wines down from the vineyards to the ‘lodges’ of the Port shippers at Oporto near the coast. The earliest references to boats carrying wine along the Douro date from around 1200 when they were referred to as barcas taverneiras, or ‘taverner barges’. However, throughout most of the history of Port and until well into the 20th century, the vessels which carried out this work were the remarkable barcos rabelos.

Until a series of dams were built across the river in the 20th century, the Douro was fast running. Calmer reaches alternated with treacherous shoals and turbulent rapids, some gushing through narrow sheer-sided gorges. Rapids were often grouped along the same stretch of river constituting a formidable sequence of obstacles which required great skill to negotiate successfully. To be able to navigate in these conditions, the barco rabelo had a flat bottomed hull and a long steering oar, operated from the top of a raised platform, which allowed the crew to carry out the very precise manoeuvres necessary to traverse the rapids.  It was also fitted with a broad sail to assist it in making the journey back upstream. In the faster running reaches, it would have to be hauled against the current by teams of oxen straining on the towpath. The highly skilled and courageous crews constituted closely knit communities with their own distinctive traditions and customs.

The number of vessels operating on the river seems to have varied greatly over the years. In 1751 about 50 were said to operate but this later grew to several hundred. During the latter part of the 18th century, to cope with the increase in traffic resulting from the growth in demand for Port wine, rabelos of increasingly heavy tonnage were built, the largest carrying between 70 and 100 casks of wine.  These very large rabelos were less manoeuvrable and more prone to accidents and in 1779 legislation set the limit at 70 casks.   The largest rabelos in use in the 20th century usually carried no more than 50. The completion of the railway along the Douro in 1887 meant that the rabelo was no longer the only means of transporting wine and other bulky goods from the Douro Valley to the coast.  However for many decades it remained the method of choice. In the 1930s there were reported still to be about 300 registered vessels. As access to the Douro Valley improved, road transport began to take over. By 1961 only 6 rabelos were still operating. The last commercial journey of a rabelo is said to have taken place in 1964. 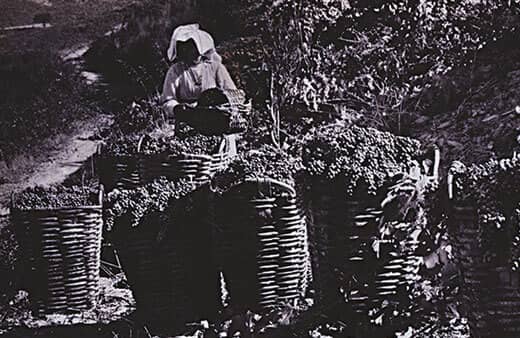 HISTORY OF PORTBirth of Vintage Port

According to some historians the first Vintage Port was made in 1775, predating the first bottled vintage Bordeaux, the Château-Lafite 1787, by twelve years.