The second half of the eighteenth century was a significant period in the history of Port and saw the start of several developments which would transform Port into the great fortified wine that we know today. Foremost among these was fortification.  In the early days, as we have seen, brandy was sometimes added to wines at the time of shipment to fortify them against the rigours of the sea voyage. However, the practice of adding brandy to the wine before it had finished fermenting, now an inseparable part of the process of making Port, was seldom followed in the early part of the 18th century. As the century progressed, it became more common as it was found to result in wines that were sweeter, stronger, more aromatic and of greater appeal to the English consumer.


However, not all merchants encouraged the practice and it was not until well into the 19th century that this method of fortification became widely adopted. Nevertheless, it gradually gained acceptance. The prosperity of the last years of the 18th century released the capital necessary to accumulate stocks of wine and mature them for longer. The superior ageing potential of Port wines that had been fortified became apparent. The turning point is sometimes said to have been the exceptional harvest of 1820 which produced Ports so magnificent that subsequent vintages could not approach their richness and power unless they were fortified.   In any event, fortification had become widespread by the 1840s and by 1850 was probably universal.

One of the fiercest opponents of fortification was the famous Baron Forrester, a legendary figure in the history of Port wine and the author of the first detailed map of the Douro Valley. He campaigned against fortification until his death in 1862 when his boat capsized in the infamous Cachão da Valeira, or Valeira gorge. Forrester had been lunching further up the river at  Quinta de Vargellas, the famous estate now belonging to Taylor Fladgate, with Dona Antónia Ferreira, founder of the Ferreira Port house, and Baroness Fladgate, wife of John Fladgate, Baron of Roêda. After lunch, as he travelled down through the gorge in the company of the two ladies, his boat hit a rock, throwing passengers and crew into the fast running water of the rapids.  The ladies survived, their air filled crinolines buoying them to safety, but Forrester, possibly weighed down by the gold sovereigns in his money belt, was never found.   Forrester was a man of great determination and, had he survived to convince his colleagues of the error of their ways, Port would probably not be the iconic fortified wine that we know today. 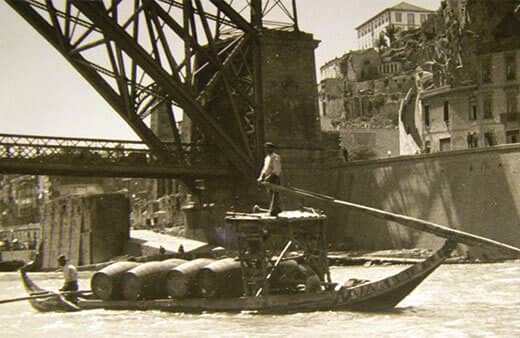 Until relatively recently, the Port wine trade was reliant on the Douro river to bring the wines down from the vineyards to the ‘lodges’ of the Port shippers at Oporto near the coast.