The Birth of Port

A few years later, events conspired to escalate the exports of Portuguese wine to England.  In 1667 Colbert, first minister of Louis XIV, embarked on a series of measures to restrict the import of English goods into France. This provoked Charles II of England into increasing the duty on French wines and later forbidding their import altogether, obliging the English wine trade to seek alternative sources of supply.


The opportunity was seized by the English merchants at Viana do Castelo who began to concentrate their efforts on the rapidly growing wine business. They realised that the thin, astringent and often unstable wines made in the temperate and humid coastal climate of the Minho were not to the liking of the English consumer. They began to look inland to the more robust, full bodied wines from the steep and rocky hillsides of the upper Douro Valley, the hot, arid inland region behind the Marão mountains where Port is made today.

The long distance and the wild and mountainous terrain meant that the Douro wines could not be transported overland to Viana do Castelo but had to be carried down the River Douro by boat to the city of Oporto near the coast.  From Oporto, ships would then carry them to England, sailing out into the Atlantic over the treacherous mouth of the Douro River. In order to develop their business in the wines of the Douro, the merchants of Viana do Castelo had therefore to establish themselves in Oporto and by the end of the first decade of the 18th century most of them had done so. One of the early pioneers of the trade in Douro wine was Peter Bearsley, son of the founder of Taylor Fladgate, who was said to be the first English wine merchant to make the hazardous and uncomfortable journey into the upper reaches of the Douro Valley in search of the best wine.

Although they came from the mountainous hinterland of the Douro Valley some 80 kilometres from the coast, the wines took the name of the city from which they were shipped, becoming known in Portuguese as Vinho do Porto, meaning ‘Oporto wine’, and in English as ‘Port’. The earliest recorded shipment of wine under this name took place in 1678. To protect the wine during the long sea voyage it was sometimes ‘fortified’ prior to shipment with the addition of a small amount of grape spirit, or brandy, which increased its strength and prevented it from spoiling.  However, the technique of adding a small proportion of brandy to keep the wine sound during shipment should not be confused with the process, now an essential part of the making of Port, of adding brandy to the wine during fermentation. As we shall see, the latter method of fortification was only universally adopted much later.  In the early decades, most Port wine was not fortified at all. 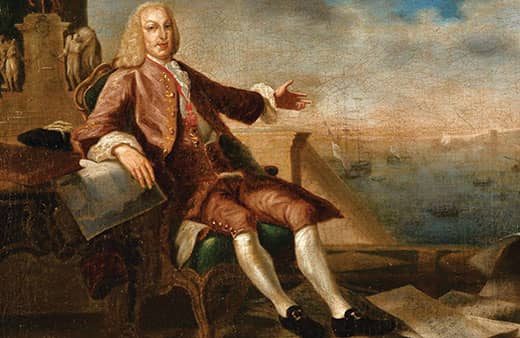 History of PortThe Marquis of Pombal

In 1756, the Marquis of Pombal established state control over the Port wine trade, which although unpopular at the time, resulted in an improvement in the quality of Port wine.