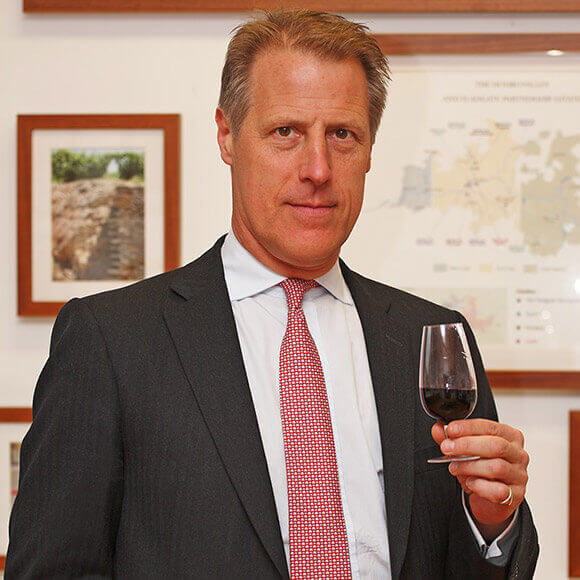 Adrian was first exposed to the Port industry in 1982 when he met his wife Natasha,  However, he only joined the industry in 1994.  In 1983 he was commissioned into The 1st Queen’s Dragoon Guards after being awarded the ‘Sword of Honour’ as the leading officer cadet of his year at Sandhurst.  After five years military service, during which time he spent a year peacekeeping with the United Nations, he left the city to join an investment bank.  He joined NatWest Investment Bank in London where he rose to be head of US equity sales.

In 1994, he and his wife moved out to live in Portugal where he took control of the company’s brands, Taylor’s Port and Fonseca Port, in the UK and USA markets.  He accompanied first hand the changes in the UK market and was involved in the rapid expansion of the USA Port market during the 1990’s.

In 2000, he formally took over the role of Managing Director of the Taylor Fonseca Port Group.  Having been instrumental in the group buying the assets of Borges Port in 1999, he further expanded the company with the purchase of Croft Port and Delaforce Port in 2001, from Diageo.  The subsequent reorganization of the group, to form The Fladgate Partnership, and repackaging of these brands has helped the group to become a leading supplier of Port in the major premium markets of the world.

The company has won many awards including European Winery of the Year 2002 by The Wine Enthusiast, an American wine magazine, and has been awarded more 100 point wines than any of its competitors.  The vintage Ports of Taylor and Fonseca are considered the quality reference for the sector.

In 2008 Adrian created a new style of Port – Croft Pink – the first new Port for over a generation.

In 2010, The Yeatman Hotel was launched – this luxury wine hotel has been Adrian’s project for over 5 years and he was involved in every detail of the concept, design, branding  and launch of the hotel.  For this he was awarded the ‘Gold Medal’ of the City – the highest civic honour a municipality can bestow.